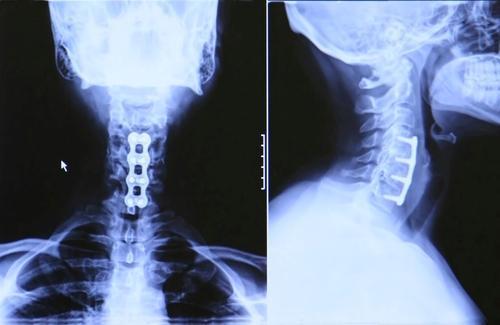 Anterior cervical discectomy and fusion is a surgery to remove a herniated or degenerative disc in the neck. An incision is made in the front (anterior) of the neck and the neck muscles, trachea, and esophagus are moved to the side, exposing the affected disc and vertebrae. Once the affected disc is located, it is removed and replaced with a bone graft to prevent the vertebrae from collapsing or rubbing together. Any bone spurs that are pressing on your nerve root are removed, and the foramen, where your spinal nerve exits, is enlarged with a drill. The bone graft and vertebrae are then stabilized with metal plates and screws, which will help the vertebrae to fuse together, stabilizing the neck. Patients can typically go home the following day. The patient is expected to ambulate a few hours after surgery. The standard recovery time is about  four weeks, with people going back to work as soon as two weeks after surgery. The incision is usually cosmetically placed along the neck creases and leaves minimal scarring.